What is a Medigap? (Medicare Supplement)

​Medigap plans (also known as Medicare Supplement plans) have been around for a long time. These are the types of plans we hear so many tell us, "I think that is what my parents had!" Medigaps have changed quite a bit over the last 20+ years, but the basic principle remains the same. Medicare Supplement plans pay as a secondary insurance after Medicare has paid. Medicare pays 80% of a person's medical bills, and the supplement plan (purchased through a private insurance company) comes in and pays afterward.

What Kinds Of Medigap Plans Exist?

​So the answer to what you've been thinking is... YES! Every insurance company that offers Medicare supplement plans offer the same coverage, just for different prices. The Supplement plans are designed based on what they will cover depending how much Medicare leaves behind. They are all named after letters. The most popular Medicare Supplement plans on the market today are by far the Plan G and the Plan N. Here is a chart of the available plans below. 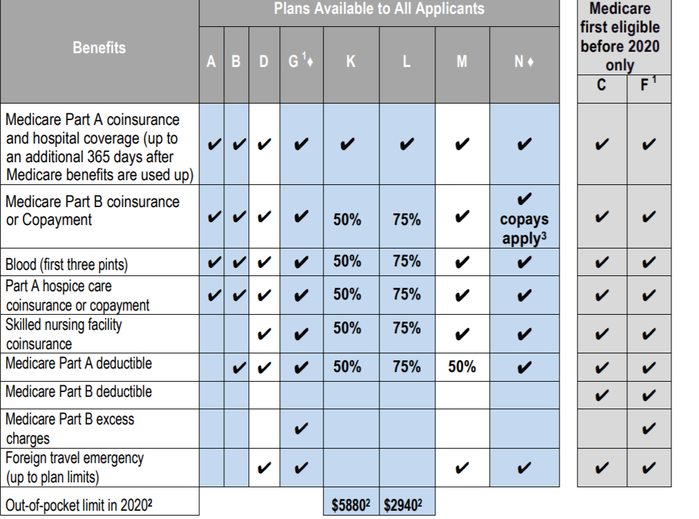 What Plans Are Good?

Today and going forward, it is all about Plans G and N. Plans F and C are no longer able to be purchased due to the MACRA bill that took effect on January 1, 2020. The bill states that any person who was eligible for Medicare before January 1st of 2020 will still have the option of purchasing a Plan F or Plan C with any insurance company. Plan G is the closest thing to Plan F with it only leaving behind the Medicare Part-B deductible which is charged once per year.

​The Plan N also charges this Medicare-Part B deductible, but it also does not cover what is known as Medicare Part-B excess charges. It also charges up to a $20 copay for each doctor visit and a $50 copay for an emergency room visit. The appeal of Plans G and N over a Plan F (even before it was grandfathered away) was they both are much cheaper in terms of monthly premium, with N being cheaper than F and G in most areas.